In Lawmatics you will find two built-in fields designed to capture the monetary value associated with each of your matters, Estimated Value and Actual Value.

At its most basic level, Estimated Value is meant to capture the expected revenue that will be generated from a lead if they convert. This is populated during the intake phase, before a lead has hired your firm. To get the most insight from the Lawmatics reporting & analytics, you will want to populate this field as soon as you have an estimation for what a lead will be worth.

Actual Value will not be populated until the matter has converted, or become a hired client. It is meant to hold the actual amount of revenue that you received in the matter. This is something that should be entered either after the matter has retained or after the case is completely over, depending on the nature of your practice.

As previously mentioned, estimated value is meant to capture the anticipated value of a matter. Perhaps you have a married couple approaching your firm for an estate plan. Maybe you have flat fee pricing, or even if not you might still have an idea what you think the case will be worth based on their simple information. As soon as you have an idea of this value, you will want to populate this number into the estimated value field for that matter.

To populate the estimated value, go to the matter's profile, and click the edit pencil next to the Estimated Case Value found at the very top of their profile.

Alternatively, you can also access this same field by clicking the edit button at the bottom of the details page, and then populate the field as highlighted below. This field on the details page is the same as the field shown at the top of the profile in the image above, so they will automatically show the same value in both places when you populate it in either place. 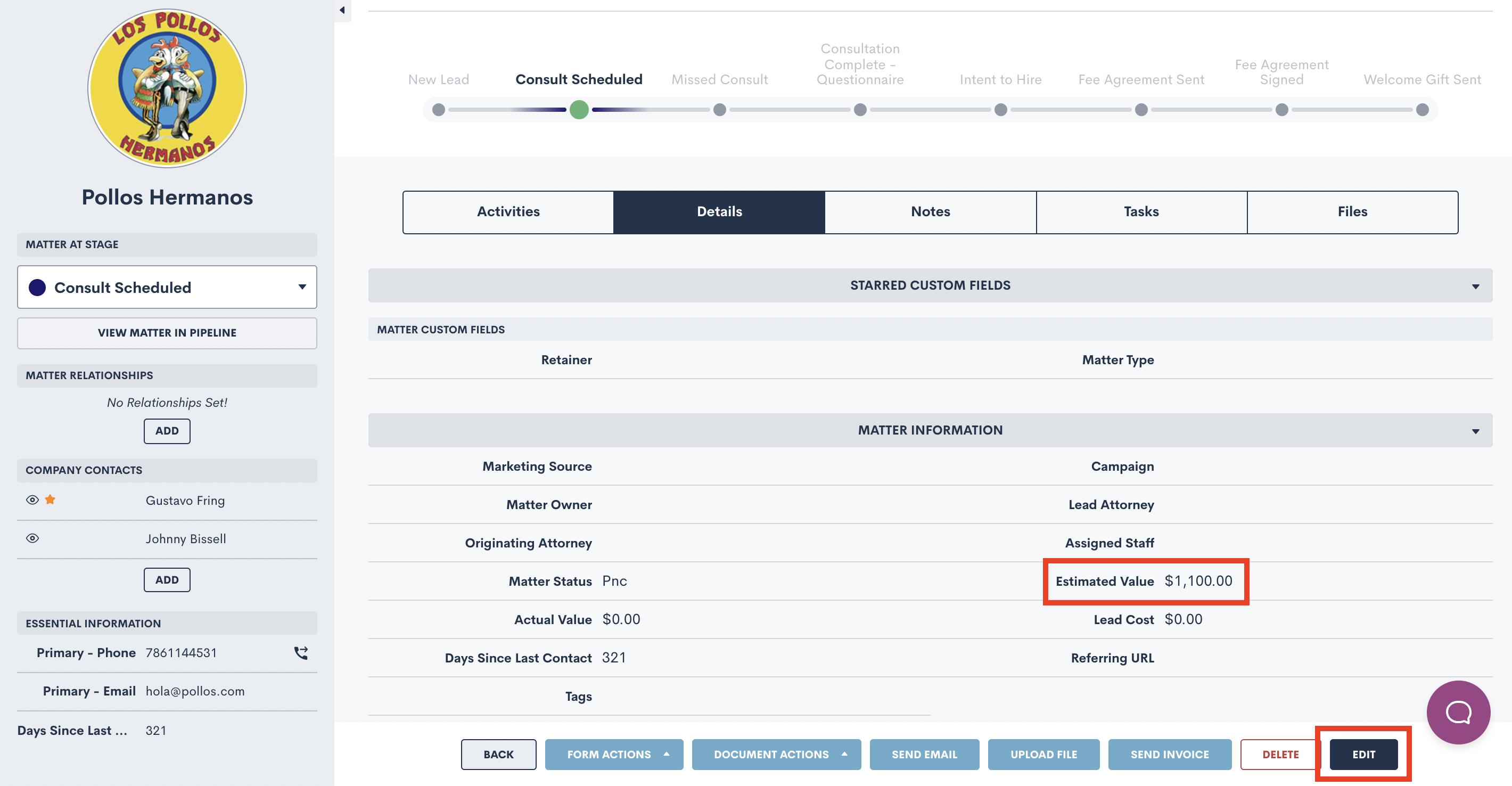 Depending on your practice, if you primarily work with flat fee cases you may be able to populate the estimated value using an automation. Let's say that when a lead comes in for a certain practice area, you may know exactly what the flat fee for their case will be. To populate that in an automation, you would simply use the change attributes action, shown below.

This is completely optional, but it can be a good way to add more automation into your process when applicable.

The estimated value field will be used in several reporting calculations in Lawmatics, including in your intake pipeline. Lawmatics will use the estimated value to give you revenue projections from each stage of your process that is represented with a pipeline stage. This is designed to give you a rough estimate of the amount of revenue that you have sitting in your pipeline. 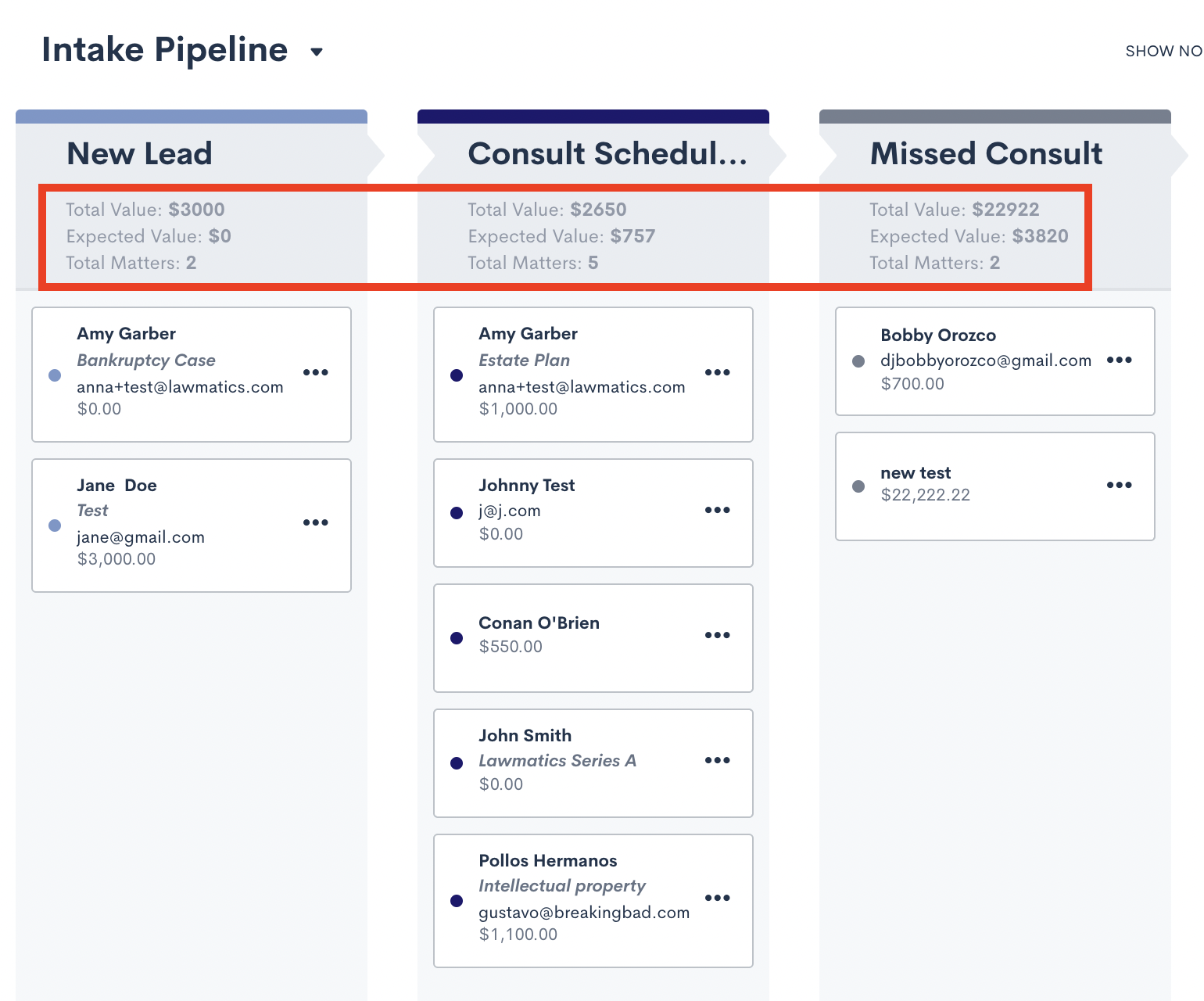 You can also use estimated value in custom reports in order to view this data in the way that you want to see it.

The Actual Value field is intended to track the total revenue that your firm generated from a particular matter. For that reason, it is typically a number that is added into Lawmatics only when a matter is completely closed out, or when all money has been received on the matter.

It is best practice to populate this field as soon as you know the actual value of a matter, since this number is a critical piece to the ROI (Return on Investment) reporting and analytics in Lawmatics.

To populate this field, you will go to the details page of a matter, click edit at the bottom right, and then enter the dollar amount in the field highlighted below. 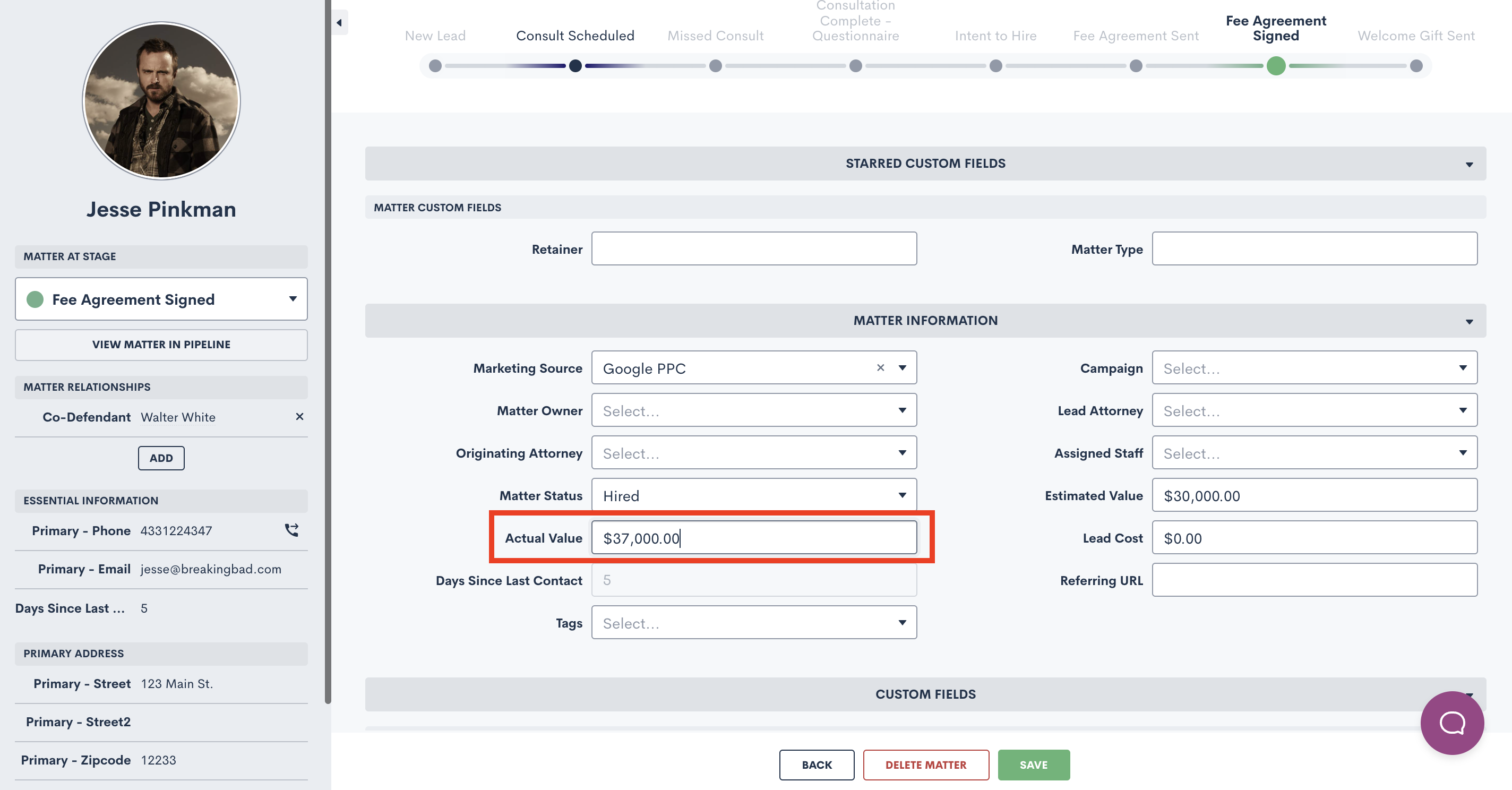 Where in Lawmatics will these fields be used for reporting?

These fields are used for calculations in the Stats at a Glance section of the dashboard, as well as in the ROI Tracker and Analytics page, both found under the Insights tab.

Should I make a custom field for tracking the value of my leads?

No, it is strongly recommended to use the standard Estimated Value and Actual Value fields to avoid redundancy, since these are the fields used for all of our built-in calculations.