Exit conditions are extremely important for automations spanning a length of time, or any automation where the target may no longer qualify for the automation at some point during the workflow.

A few examples of automations that will typically require exit conditions include but are not limited to:

Let's consider the following hypothetical automation, which is commonly created in Lawmatics. You may wish to send an intake form to a lead, and if they have not filled it out after 1 week you would like to automatically send the form again with a reminder to submit.

While it is often tempting to use an If Condition for this automation, that is actually not the best way to create this automation. Instead, we will use exit conditions.

Click on the Exit Conditions box, shown above, and then select Add Exit Conditions. You will then select from the options on the right sidebar. Note that these are the same options as your Entry Conditions. For this particular example, we will use the Form Filled exit condition, since that is the condition that would cause a target to exit this automation and not receive the reminder. 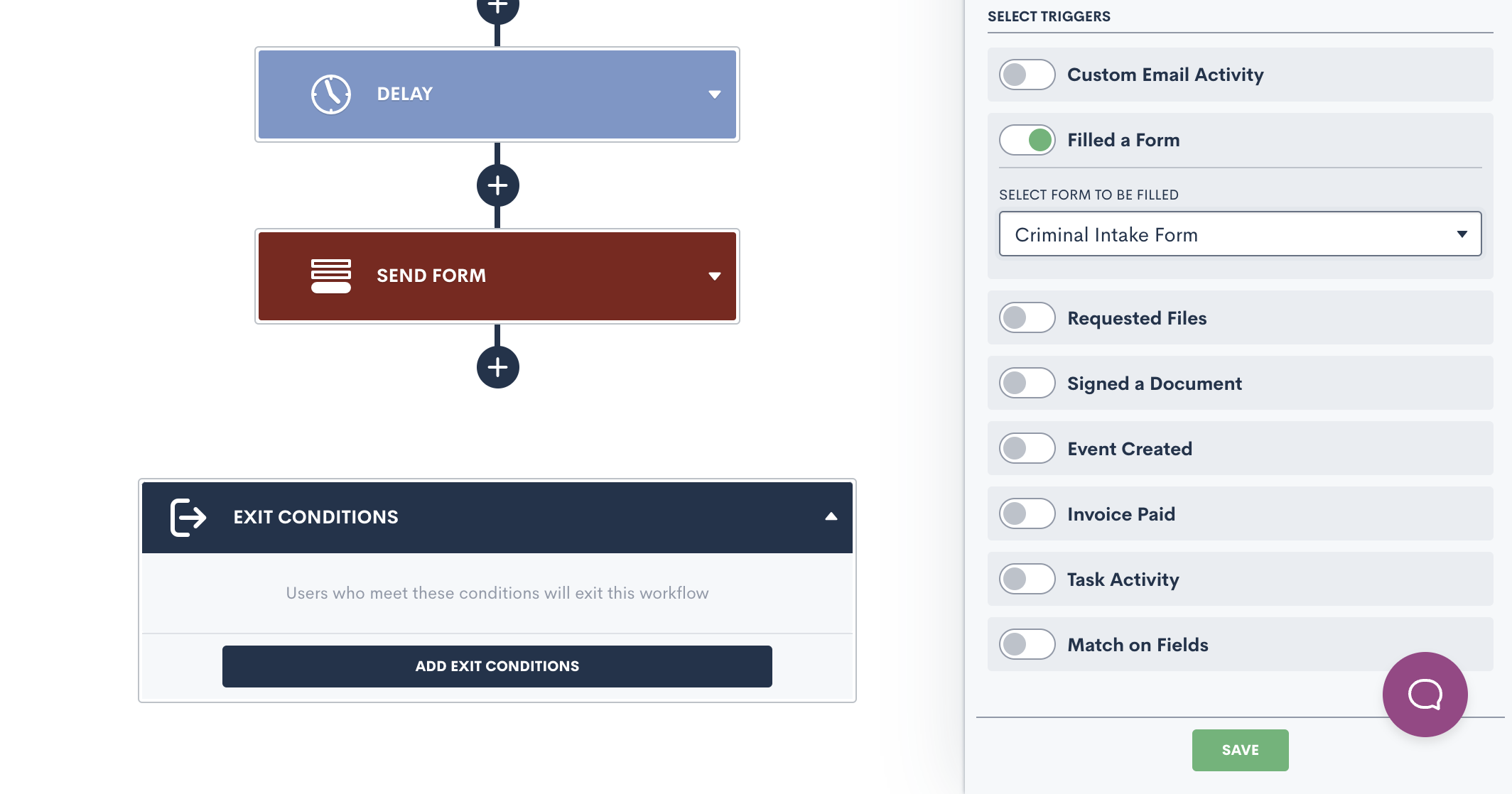 Make sure you click Save shown at the bottom right after selecting your condition.

Note that you can use multiple exit conditions, selecting an AND or OR relationship just like you can do with multiple entry conditions.

Once we have saved the exit condition, we are done with this automation. You may wish to have the next step in your process trigger once the target fills out the form. Again, it may be tempting to use an If Condition in our current automation for this, but will not work to trigger your next step properly.

Instead, you would want to create a separate automation using the Filled a Form entry condition. That way, once they fill out their form they will automatically exit from the automation sending the form, and enter into an automation triggering the next steps.

Let's examine another example of an automation where exit conditions are necessary. You may wish to have an automation trigger when a matter enters a particular stage of pipeline, and have the automation continue running as long as they are in that stage. This can be useful for new lead follow ups, appointment no shows, among other things.

For this automation, we would use the match on fields entry condition, and select the stage of the pipeline that should trigger the workflow. We will then add our various action items. 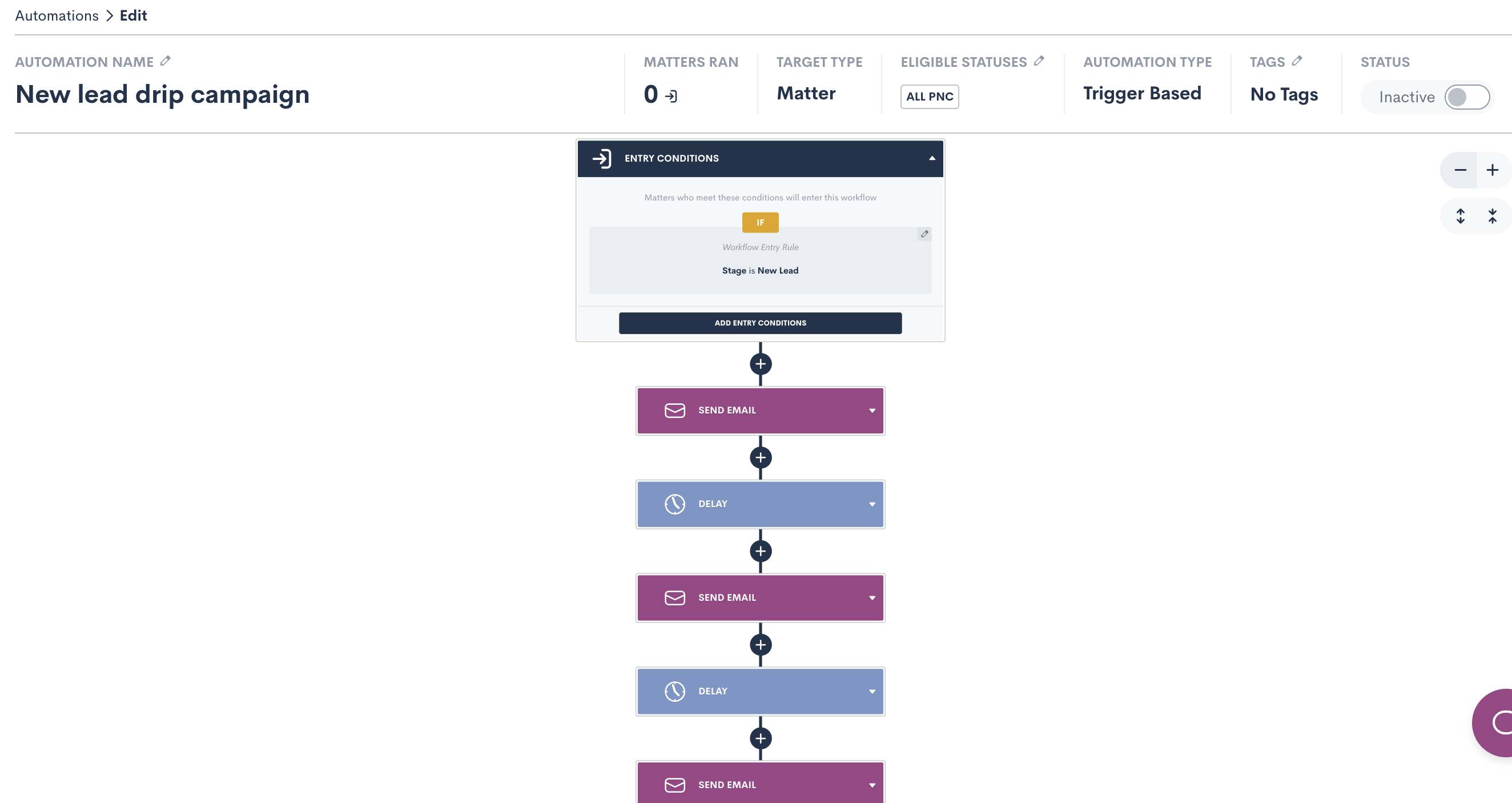 It is very important that once this lead moves out of the new lead stage and into the next stage of your pipeline, they should not keep getting emails from this particular drip campaign. To make sure that this happens appropriately, we will add an exit condition as such:

By creating an exit condition for Stage IS NOT EQUAL TO New Lead, we are ensuring that the matter will only stay in this automation as long as they are in the New Lead stage of our pipeline. Once they move to any other stage, they will exit this automation.

My matter meets the exit conditions but it still says their status in the automation is "running", why has it not changed to exited?

Once a matter has exited an automation can they enter back into the automation at a later time?

How do I know if a matter has exited an automation?

You will see the matter's status in this automation change to exited. The status can be viewed on the matter's profile or on the stats page for the automation in question.